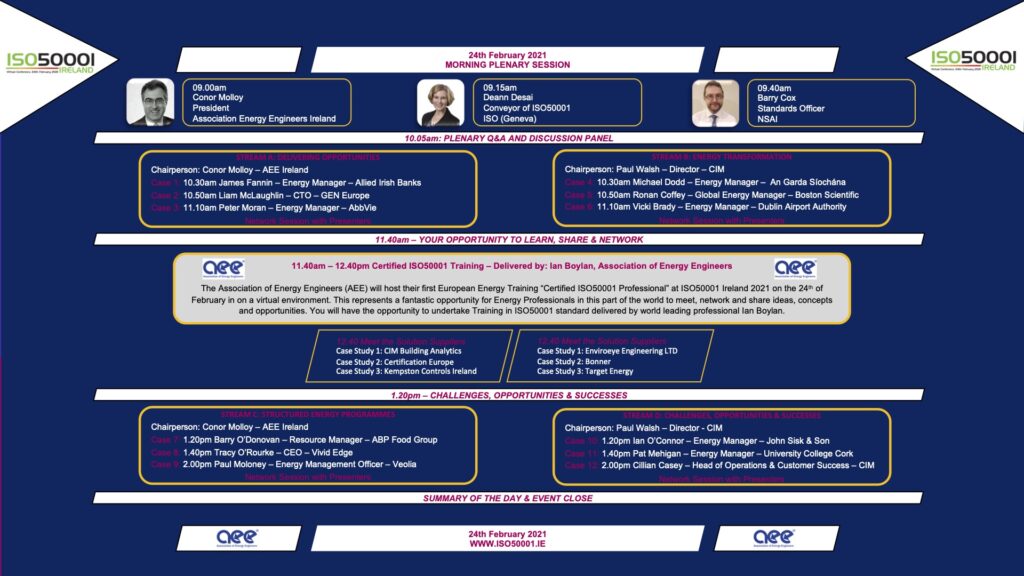 Barry Cox has a Bachelor in Electronic Engineering from Dublin City University. He has been a Standard Officer with NSAI since 2019 but has worked with NSAI since 2008 and has over a decade of experience in conformity assessments and enforcement of National and European legislation with regards to measuring instruments. This led to his involvement in a variety of successful prosecutions.

Barry manages a portfolio of manufacturing committees and participates in regular training courses and events to keep his knowledge up to date. He is also tasked with promoting Irish participation in the development of International (ISO) and European (EN) Standards in emerging technologies such as Additive Manufacturing, Industrial Robots, Energy Management & Energy Savings and Nanotechnology.

Barry has worked with ABP Food Group since 2013 where he has been directly involved in all aspects of the company's environmental and sustainability objectives and strategies.

This work has helped ABP Food Group achieve significant reductions in carbon emissions, water usage, energy consumption and waste generation. As a result, I have been directly involved with the following standards, certificates and organisations:

Cillian is Head of Operations and Customer Success for CIM. CIM is a building analytics software company that empowers organisations to operate their buildings as efficiently and sustainably as possible, giving data insights needed to optimise energy consumption and slash carbon emissions. CIM’s building analytics technology makes it easy to improve and track operational performance across facilities

Prior to joining CIM, Cillian spent 8 years in Australia working for an energy optimisation and system integration organisation with a focus in the commercial, retail, health, and industrial sectors. Cillian has extensive knowledge in building management controls systems, HVAC systems, mechanical system maintenance and energy management.

Deann Desai is a project manager for Georgia Tech’s Enterprise Innovation Institute. She is actively involved in ISO committees on a variety of topics. She provides implementation assistance and training to companies pursuing ISO 9001, ISO 14001, and ISO 50001. Desai has experience in energy management, environmental compliance, policies, and regulatory affairs; quality systems; statistical process control; experimental design; and analytical and scientific techniques. She has assisted over 175 companies with ISO 9001, ISO 14001, and ISO 50001 implementations.

Desai has M.S. degrees in Statistics and Polymers from the Georgia Institute of Technology and a B.S. in Chemistry from the University of Georgia. She is a member of the American Society for Quality, American Management Association, and the American Chemical Society. She serves on a multitude of ISO standards committees and chairs including the JTCG.Specialties: Structured Energy Management (ISO 50001 Specialist), Measurement and verification of energy savings, Energy Training

Ian is a keen proponent of pushing the boundaries of the innovative technologies such as data mining, battery technology and alternative fuels and this has led to the development of sustainable solutions that are pioneering in the global construction industry.

He is experienced at developing medium and long term strategies with SMART targets and action plans for successful implementation. His approach has been to harness wide ranging expertise from key partners and stakeholders to build consensus and take a collaborative approach to achieving objectives.

James has been part of the AIB Energy & Environmental team since 2019, having taken the role of Energy Manager. James had previously held an Operations role with the AIB Engineering Services team. James has successfully helped AIB to maintain its ISO50001 certification including the transition to the new 2018 standard. James has developed an excellent knowledge of the SEUs throughout the AIB estate and leverages this to deliver energy projects with key stakeholders and partners.

AIB were the winners of the Green Awards - Large Green Organisation in 2020 which results from the increasing commitment to Sustainability by AIB. Prior to AIB, James has worked as an engineering consultant, with experience across a variety of sectors.

Liam Mc Laughlin has been working on energy management systems in Ireland since 2005 and internationally since 2011 through UNIDO's pilot EnMS project in South Africa. He studied Marine Engineering initially and later achieved a Master’s in Business Administration (MBA). The first decade of Liam's career was spent as a sea-going
marine engineer. This was followed by over a decade as an energy manager in the pharmaceutical industry.

Since 2001, he has worked as an independent international energy efficiency and energy management consultant.
He is the UNIDO expert on the ISO Technical Committee that developed ISO 50001 and its supporting standards. He has been the lead author on a number of Guidebooks on implementing energy management systems published by ISO and UNIDO. He has lectured over a number of years at the University of Geneva on the topic of energy management systems. He has worked with UNIDO in South Africa, Malaysia, Moldova, Russia, North Macedonia, Georgia, Iran and Ukraine.

Through his role as CEO of GEN Europe (geneu.eu), he has developed training programs on behalf of ISO that have been delivered to energy experts in over 100 countries globally. He is currently the Course Director for the European Defence Agency supporting the implementation of energy management systems throughout the defence forces of the EU. He is also currently leading an ISO 5001 implementation project for the water sector in Jordan.

Liam firmly believes that energy conservation and energy efficiency should be central to climate action policy and to organisations' efforts to reduce energy cost and environmental impact. Energy efficiency is the fastest, lowest cost and lowest risk approach to reducing greenhouse gas emissions in most organisations.

Michael is the Financial Accountant and energy manager for An Garda Síochána.

Prior to joining An Garda Síochána in 2000, Michael spent 17 years in the private sector manufacturing, retail and warehousing in Scotland and England where he held a number of financial positions.

An Garda Síochána became the first police force in the world to achieve ISO50001 for Garda Headquarters and its fleet in April 2016 and subsequently Garda College in December 2016.

Pat Mehigan MSc, BEng, was appointed the UCC Energy Manager in 2016 Patand is tasked with working with staff and students to deliver on the Universities sustainability strategy which is framed around the United Nations Sustainable Development Goals.

Through UCC’s established ISO 50001 energy management system Pat works with the significant energy users across the estate to manage their energy use through operational control, building awareness campaigns and implementing energy efficiency upgrades. As part of the Building & Estates Office Pat also works on the award winning Green Campus program, which is a student led, research informed and practice focused approach to embedding sustainability.

Peter is a results-oriented engineering, management and energy management professional with extensive experience in various industry sectors. Best described as proactive, talented and committed, and with a proven track record of achievement. Peter fulfils a number of roles for AbbVie where he is the Energy Management Leader and Sustainability Lead at AbbVie MHR and also provides AbbVie Global Energy Support for Irish and European manufacturing sites. Peter holds an MBA, a Degree in Mechanical Engineering and a number of energy management qualifications including Certified Energy Manager (CEM). Peters contributions in energy management were recognised by his peers when he was awarded the 2017 Energy Manager of the Year Award for Western Europe by the AEE.

With Boston Scientific for 18 years: 15 in Facilities Engineering at the Galway manufacturing plant, Energy Manager since 2018 in the Global Real Estate function.

I lead the GEMS (Global Energy Management System) effort, working towards BSC’s goal of Carbon Neutrality by 2030 in our manufacturing operations. I am responsible for driving energy performance improvement across BSC’s global manufacturing network, as well as decarbonising our energy streams.

Transform your approach to implementing energy efficiency projects through working with us.

Vicki is a qualified engineer with a MSc in Energy Management. Since joining daa’s energy team Vicki has been instrumental in helping the organisation maintain its ISO50001 certification and successfully transition to the new 2018 standard. A key part of this transition was around the tracking and management of energy performance using the online metering system to develop SEUs to monitor and control energy consumption. In her role as key account manager with the energy team she is also responsible for the management of the energy monitoring system, project development, stakeholder engagement, billing of concessionaries and monthly reporting.  Prior to daa Vicki has worked on the implementation of ISO50001 for various organisations in her role as energy engineer for facility management and utility companies.